What is Osgood-Schlatter disease?

Osgood-Schlatter disease is a common condition affecting the growth plate at the top of the shin (just below the knee) in young teenage girls and boys. It is named after the American surgeon Robert Osgood and the Swiss surgeon Carl Schlatter who described this condition in the early part of last century. Although it is most commonly described as ‘Osgood-Schlatter disease’ it is not a disease in the ‘infectious’ sense but rather an injury bought on by repetitive activity during early adolescence.

Osgood-Schlatter disease may affect both knees and is far more common in males. Patients are typically very active and are often involved in numerous sports. Not uncommonly, the onset of pain coincides with rapid periods of growth during the patient’s adolescent years or may arise after an intense period of physical activity and sporting involvement.

tuberosity’). In growingbodies, this point of attachment is ‘separated’ by a small cartilage plate that allows for growth of the bone and will eventually fuse completely with the tibia once skeletal maturity has been reached. In active teenagers, the stress placed on this point of attachment by repeated contraction of the quadriceps (running and jumping sports in particular) causes inflammation around this growth plate and can cause the small tip of bone to become separated from the tibia (see picture opposite). The result is pain in this region and one very distressed teenager.

The pain of Osgood-Schlatter disease is felt at the front of the knee around the lump at the top of the shin – about an inch below the tip of the patella. This lump of bone may be swollen, tender and even slightly reddened. Pain will be worsened by sports involving repetitive or fast contractions of the quadriceps and particularly with kicking (football, soccer), jumping (netball, basketball, football) and running (pretty much every sport besides swimming, boxing, archery and golf).

How does physiotherapy treat Osgood-Schlatter disease?

Usually the diagnosis of Osgood-Schlatter disease is made without the need for an x-ray. Conditions which may mimic the symptoms of Osgood-Schlatter disease include: patella tendonitis, patella-femoral syndrome, infra-patella fat pad impingement and other afflictions of the tibia (stress fractures, osteomyelitis etc). These pathologies can be readily excluded by your physiotherapist. In most cases an Osgood-Shlatter brace is a reliable and cheap way to manage the pain of this condition. Patients can be taught to tape the knee but this is usually more expensive (in the long run) and less effective than a brace. Rehabilitation will usually follow one of two paths: ‘Active rehabilitation’ or ‘Passive rehabilitation’.

Active rehabilitation means that the patient can continue playing their regular sport whilst wearing the knee brace. This is recommended in cases where the brace provides complete relief of symptoms. Often the patient will be instructed to wear the brace continuously (not when sleeping) so they do not inadvertently aggravate the problem with the spontaneous playground activities that teenage boys are known for. This period of continually wearing the brace will usually last for between 4 to 6 weeks. After this time, the brace will only need to be worn during sporting activities for a further 6 weeks. 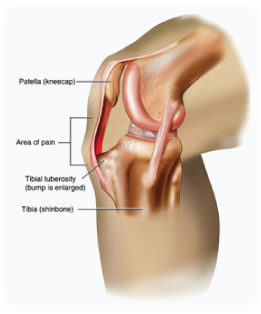 Passive rehabilitation is recommended when the brace does not provide complete relief of symptoms. This may be the case in sports such as triple-jump or basketball where there is significant jumping (and landing) involved. Passive rehabilitation may also be necessary if the pain has persisted for more than a month or two or when there is considerable swelling around the tibial tuberosity. Patients will be required to abstain from ALL sporting activities for between 4 to 6 weeks and it is advisable to wear the brace continuously during this time. Only walking, cycling and swimming are permitted. After this period of rest most patients can then return to the ‘active rehabilitation’ programme described above. In both active and passive rehabilitations, the physiotherapist will outline various stretching and strengthening routines to assist the recovery.

Teenage compliance with both enforced rest and prescribed exercise is questionable at best. For that reason, the difficulty of treating Osgood-Schlatter disease may be overcome by ensuring the patient and parents have a thorough understanding of the condition as well as the potential long term problems that can arise if the condition is not treated properly – patella tendon enthesopathy and patella-femoral syndrome.

Although Osgood-Schlatter condition is simple and cheap to remedy, there is no ‘quick-fix’. It occurs at a time in a teenager’s life when ‘rest’ is a dirty word. This can make it a very frustrating condition to treat. An understanding parent can make the world of difference.

If you have any further questions on this subject, or you would like to contact the physiotherapist best suited to managing your problem please call or email us.