Ankylosing spondylitis (AS) is a progressive and potentially disabling inflammatory disorder. It primarily affects the sacroiliac joints and the spine (the axial skeleton). AS is a genetic, immune-mediated disease, and is strongly associated with the HLA-B27 genotype.

Ankylosing spondylitis affects around 0.5% of the population (one in 200 individuals) and is thought to account for as much as 5% of patients presenting with long-standing back pain. It affects more men than women and typically between the ages of 20 and 40 years. 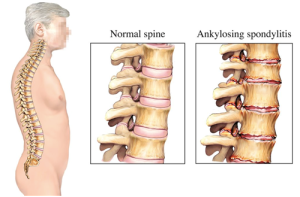 The pain of AS is caused by inflammation of the sacroiliac joint or the facet joints of the spine – sacroilitis and spondylitis. Syndesmophytes (bony growths originating from within ligaments of the spine) lead to ankylosis (bony fusion) of the spine and stiffening

Other symptoms include asymmetric oligoarthritis, and enthesitis, (inflammation of the insertional points of ligaments, tendons and joint capsules at the bony attachment site). Enthesitis often presents as Achilles pain, plantar fascioses or chest wall pain.

AS is diagnosed by both clinical presentation (symptoms) and radiographic imaging. It is important to note that many inflammatory arthropathies may not show any radiographic change in early presentations. Diagnosis includes a combination of: limited motion of the spine, persistent lower back pain (lasting more than 3-months), limited chest expansion and radiographic evidence of sacroilitis.

Assessment should include a thorough history in order to differentiate mechanical from inflammatory back pain. Inflammatory back pain may be suspected in patients with fatigue, morning stiffness and pain that is not relieved by rest. Additional symptoms of systemic tendon pain, ethesopathic pain or tenderness and shortness of breath with exertion may lead the clinician to suspect AS.

It is vital to educate the patient on the progression of the disease, the importance of exercise and the maintenance of posture. It is also essential to maintain fitness and cardiac function.

Physiotherapists are integral in maintaining both fitness and flexibility in their patients. In the early stage of the disease, land or gym-based cardiovascular exercises are important. This may progress to hydrotherapy if pain is severe or joint function inhibits land-based exercise. Motivation (for ANY patient) is difficult and a good therapist will need to be dynamic and enthusiastic to achieve results.

Non-steroidal antinflamatory drugs (NSAIDs) are considered the first-line drug treatment for AS patients.

Anti TNF-α therapy: This class of medications has been shown to be very effective in the treatment of AS and is second-line treatment in patients who have been non-responsive or intolerant of NSAIDs .

These medications must be initiated by a rheumatologist as they are costly to Medicare and may pose significant complications – primarily an increased risk of infection. These classes of medication has been shown to both increase susceptibility to tuberculosis (TB) and reactivate latent TB. (It is mandatory to screen for TB prior to commencing treatment with anti-TNF medications).

Anti TNF-α therapy is associated with an increased risk of melanoma and other skin cancers so regular skin checks with a suitably qualified GP or dermatologist is essential – more so in cases where there is a familial predisposition to developing skin cancers.